Both Resuscitation Council UK and the British Heart Foundation are committed to saving lives through ensuring more people survive an out-of-hospital cardiac arrest from increased public education and awareness.

Public Access Defibrillation (PAD) – where members of the lay public deliver defibrillation to a cardiac arrest victim before the arrival of the emergency services – can lead to substantially improved survival rates from out-of-hospital cardiac arrest.

In 2006, the Resuscitation Council UK BLS/AED Subcommittee designed a standard sign to indicate the presence of an automated external defibrillator (AED) to increase the opportunities for PAD. This design fulfilled the requirements of the European Union as far as colour, shape, and content are concerned, and was accepted by the Health and Safety Executive (HSE).

The International Liaison Committee on Resuscitation (ILCOR) announced in 2008 that it had approved a universal AED sign, similar to, but not the same as, the UK version.

In 2014 it was recognised that improved AED signage might encourage more people to use the AED. In July 2015, a survey of 1,895 adults was conducted and found that fewer than half recognised and understood the 2006 sign. A draft new design was produced, and in December 2015 another public survey was conducted to gather further feedback.

2,115 responses were received during this survey. These survey results contributed to the re-designed and improved signage shown below. The resulting sign has been accepted by the HSE and approved by the RCUK Executive Committee. It aims to ensure more people understand what they are used for and are encouraged to use them.

The new AED location sign makes the following changes to the current one:

The supporting information poster was reviewed by experts and is consistent with the 2015 Resuscitation Council UK guidelines. It reinforces the following key messages about PAD and the use of an AED: 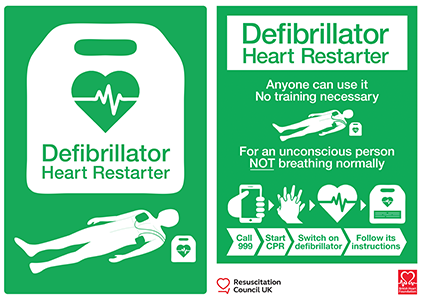 If you are a commercial organisation and would like to produce a large quantity of these signs, please email defibs@bhf.org.uk  to obtain the appropriate permission and files.