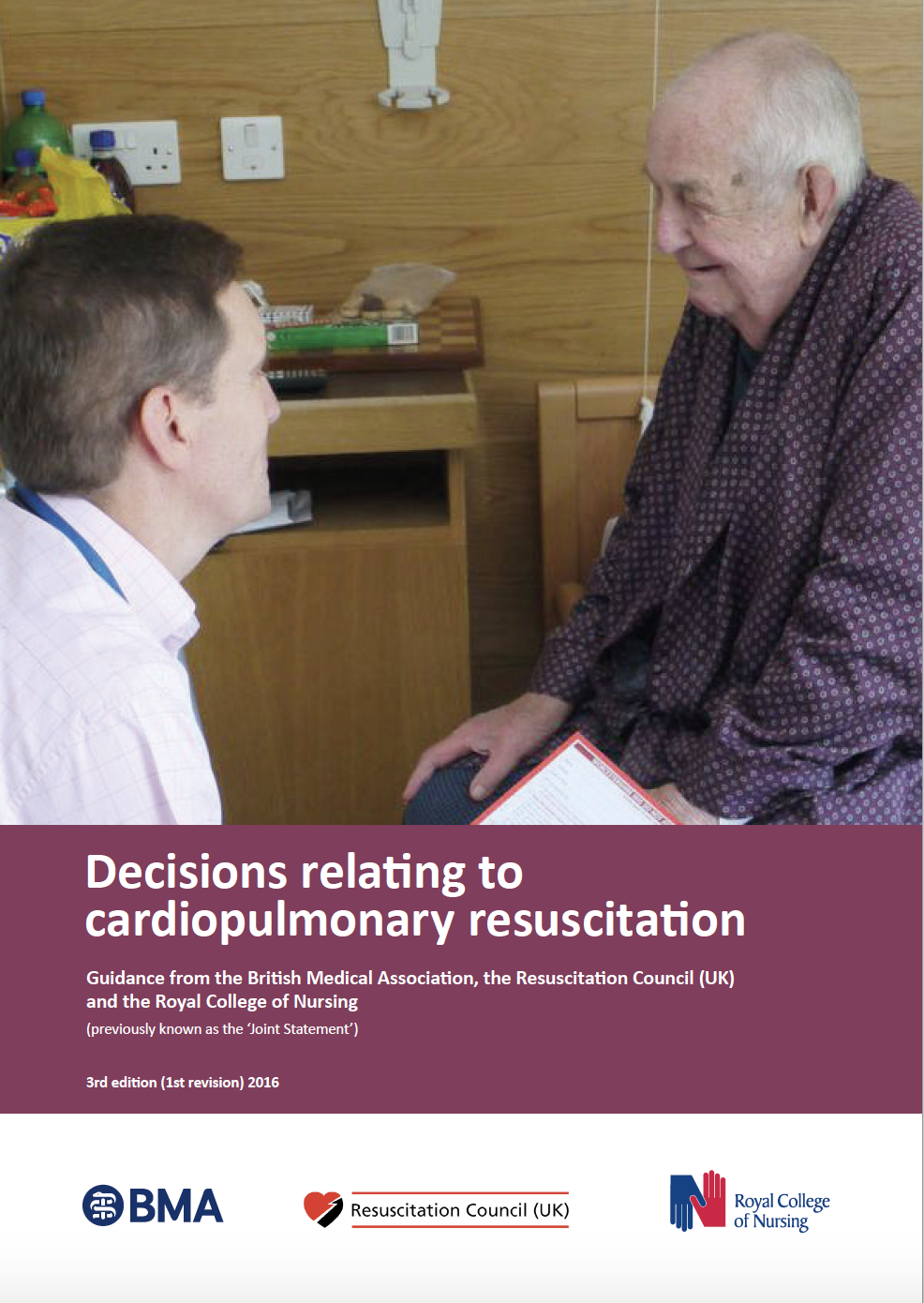 Guidance from the British Medical Association, Resuscitation Council UK, and the Royal College of Nursing (previously known as the "Joint Statement")

The British Medical Association (BMA), Resuscitation Council UK, and the Royal College of Nursing (RCN) have issued updated guidance regarding anticipatory decisions about whether or not to attempt resuscitation in a person when their heart stops or they stop breathing.

Cardiopulmonary resuscitation (CPR) was introduced in the 1960s as a treatment to try to re-start the heart when people suffer a sudden cardiac arrest from a heart attack from which they would otherwise make a good recovery. Since then, attempts at CPR have become more widespread in other clinical situations.

CPR involves chest compressions, delivery of high-voltage electric shocks across the chest, attempts to ventilate the lungs and injection of drugs. The likelihood of recovery varies greatly according to individual circumstances; the average proportion of people who survive following CPR is relatively low. Unfortunately, expectation of the likely success of CPR is often unrealistic. Attempting CPR carries a risk of unwanted adverse effects, which some people do not wish to take, especially if their individual likelihood of benefit from CPR is very low and likelihood of harm substantial. When the heart stops because a person is dying from an irreversible condition, attempting CPR will not prevent death; for some it may prolong or increase suffering. Healthcare professionals are aware that conversations about dying, and about whether or not CPR will be attempted are very sensitive and potentially distressing. As a consequence, there has been stand-alone professional guidance on CPR decision-making since the 1990s.

This latest 2016 revision of guidance is in response to public and professional debate about CPR decisions, and to recent statutory changes and legal judgments. The key ethical and legal principles that should inform all CPR decisions remain, but even greater emphasis has been placed on ensuring high-quality timely communication, decision-making and recording in relation to decisions about CPR.

This guidance offers in-depth advice on this topic and the relevant ethical principles involved. Some of the key sections are listed below:

The Recommended Summary Plan for Emergency Care and Treatment (ReSPECT) is a process which records recommendations to guide immediate decision-making about a person’s care and treatment, including about CPR, in case of a future emergency in which they lack capacity.

It has been developed by a Working Group made up of members of the public and professional organisations. The British Medical Association (BMA), Resuscitation Council UK (RCUK) and Royal College of Nursing (RCN) have each been represented on the ReSPECT Working Group and contributed to the development of ReSPECT.

ReSPECT has now been made available for adoption by health and social care communities in the UK.

The ethical and legal principles that underpin the guidance in Decisions relating to cardiopulmonary resuscitation remain the same and are valid also for the ReSPECT process.

Find out more about ReSPECT