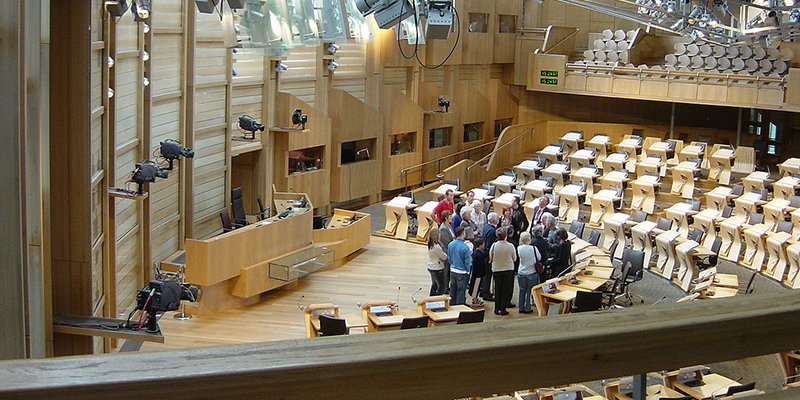 Resuscitation Council UK visited the Scottish Parliament in Edinburgh on 24 September 2019 to attend a second roundtable meeting on first aid as part of a working group led by Alex Cole-Hamilton MSP.

RCUK was invited to join the working group after our recent submission to the Scottish Parliament Petitions Committee on Public Access Defibrillation (PAD), and we attended the first roundtable meeting in May 2019.

We were pleased to see that many of our recommendations have been included in the draft strategy. We see this strategy as a fantastic opportunity to drive change in CPR and AED awareness in Scotland and will continue to push for this at future meetings.

The organisation was represented by CEO James Cant, Policy Officer Rachel Warren and Lead Educator Kevin Mackie. We were joined by several other invited organisations, including training providers and some of our Restart a Heart campaign partners such as BHF Scotland and British Red Cross.

In the event of a cardiac arrest, every minute without CPR and defibrillation reduces chances of survival by up to 10%1, which is why we place high importance on driving CPR and AED awareness in the UK.

As part of our overall aim to help improve the rate of OHCA survival in the UK, we need to ensure that all nations have the opportunity to make changes that contribute to that goal.

The work we’re doing with Scottish Parliament could be a fantastic way to see those statistics change.

With more meetings planned in the New Year, we will provide further key updates and developments surrounding this campaign as they happen.

Statement: Survival rates soar in Scotland – and it could be down to an increase in bystander CPR

Almost two thirds of people who suffered a cardiac arrest in Scotland in 2018/19 received bystander CPR – and more people survived.

RCUK discusses the importance of defibrillators in Scottish Parliament

On a visit to the Scottish Parliament, Resuscitation Council UK provided evidence surrounding Public Access Defibrillators in response to a recent petition.