The process used to produce the Resuscitation Council UK Guidelines 2015 has been accredited by the National Institute for Health and Care Excellence. The guidelines process includes:

2. Summary of changes in paediatric basic life support since the 2010 Guidelines

These guidelines aim to provide clear advice to healthcare professionals and members of the general public about the delivery of basic life support (BLS) to children.

Cardiorespiratory arrest occurs less frequently in children than in adults; thus, both healthcare professionals and lay people are less likely to be involved in paediatric resuscitation. It is therefore important to be familiar with the knowledge and skills required for paediatric BLS so that the best care possible can be delivered in what is often a stressful situation.

The review of these guidelines has incorporated new information from the ILCOR 2015 review of resuscitation science. They also include practical changes intended to aid training and retention of knowledge and skills required to deliver high quality BLS in children.

There is limited evidence on paediatric resuscitation as there are relatively few studies, particularly randomised controlled trials, in this area. Existing evidence derived from observational studies is of variable quality but new collaborations involving national and international registries should yield valuable data on the resuscitation of children.

What is known is that cardiopulmonary resuscitation (CPR) should start as soon as possible for optimum outcome. This should start with the first person on scene, who is often a bystander (i.e. a lay rescuer).

The majority of paediatric cardiorespiratory arrests are not caused by primary cardiac problems but are secondary to other causes, mostly respiratory insufficiency, hence the order of delivering the resuscitation sequence: Airway (A), Breathing (B) and Circulation (C).

If a layperson or healthcare provider considers that there are no ‘signs of life’, CPR should be started immediately.

Feeling for a pulse is not a reliable way to determine if there is an effective or inadequate circulation, and palpation of the pulse is not the sole determinant of the need for chest compressions. The presence or absence of ‘signs of life’, such as response to stimuli, normal breathing (rather than abnormal gasps) or spontaneous movement must be looked for as part of the child’s circulatory assessment.3 If a healthcare provider does feel for a pulse in an unresponsive child, they must be certain that one is present for them NOT to start CPR. In this situation, there are often other signs of life present. Lay rescuers should not be taught to feel for a pulse as part of the assessment of need for CPR.

The decision to start CPR should take less than 10 seconds from starting the initial assessment of the child’s circulatory status and if there is still doubt after that time, start CPR.

Although ventilation remains a very important component of CPR in children, rescuers who are unable or unwilling to provide breaths should be encouraged to perform at least compression-only CPR. A child is far more likely to be harmed if the bystander does nothing.

All providers should be encouraged to initiate CPR in children even if they haven't been taught specific paediatric techniques. CPR should be started with the C:V ratio that is familiar and, for most, this will be 30:2. The paediatric modifications to adult CPR should be taught to those who care for children but are unlikely to have to resuscitate them. The specific paediatric sequence incorporating the 15:2 ratio is primarily intended for those who have the potential to resuscitate children as part of their role.

Uninterrupted, high quality chest compression is vital, with attention being paid to all components of each chest compression including the rate, depth and allowing adequate time for chest recoil to occur (approximately 50% of the whole cycle should be the relaxation phase).

Training and feedback devices are being developed for adults and children but require absolute, rather than relative, dimensions for depth. In order to facilitate this for children, the measurement data indicate that the approximate dimensions of one-third compression depths in infants and children are about 4 cm and 5 cm respectively.

To maintain consistency with adult BLS guidelines, the compression rate remains at 100–120 min-1.2,4 Ideally chest compressions should be delivered on a firm surface otherwise the depth of compression may be difficult to achieve. 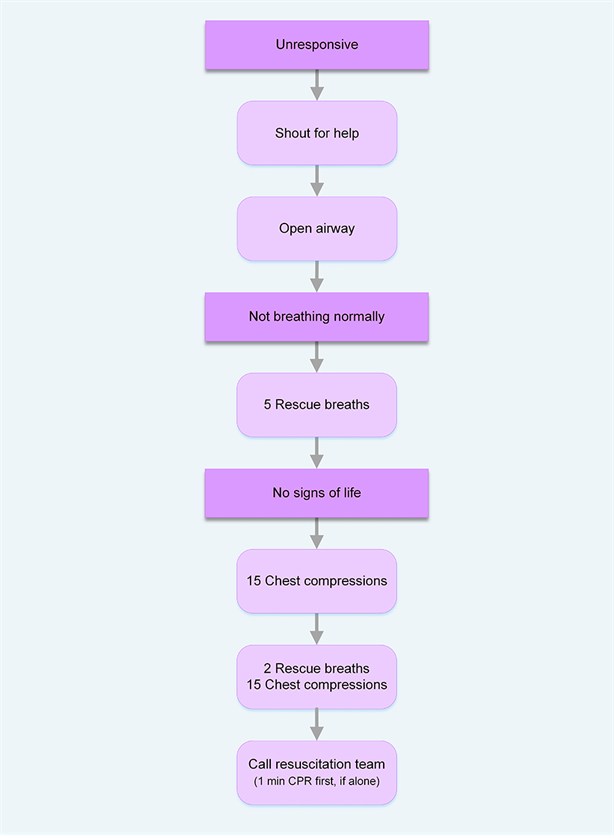 Rescuers who have been taught adult BLS, and have no specific knowledge of paediatric resuscitation, should use the adult sequence. The following modifications to the adult sequence will make it more suitable for use in children:

To learn more about adult BLS, take a look at our adult BLS guidelines.

Those with a duty to respond to paediatric emergencies (usually healthcare professional teams) should use the following sequence:

1. Ensure the safety of rescuer and child.

3A.  If the child responds by answering or moving:

3B.  If the child does not respond:

Have a low threshold for suspecting injury to the neck. If you suspect this, try to open the airway using jaw thrust alone. If this is unsuccessful, add head tilt gradually until the airway is open. Establishing an open airway takes priority over concerns about the cervical spine.

4.  Keeping the airway open, look, listen, and feel for normal breathing by putting your face close to the child’s face and looking along the chest:

Listen at the child’s nose and mouth for breath sounds.

Feel for air movement on your cheek.

In the first few minutes after cardiac arrest a child may be taking infrequent, noisy gasps. Do not confuse this with normal breathing. Look, listen, and feel for no more than 10 seconds before deciding – if you have any doubts whether breathing is normal, act as if it is not normal.

5A.  If the child IS breathing normally:

Turn the child onto his side into the recovery position (see below).

5B.  If the breathing is NOT normal or absent:

Rescue breaths for an infant:

Rescue breaths for a child over 1 year:

For both infants and children, if you have difficulty achieving an effective breath, the airway may be obstructed:

6.  Assess the circulation (signs of life):

Take no more than 10 seconds to:

7A.  If confident that you can detect signs of a circulation within 10 seconds:

7B.  If there are no signs of life, unless you are CERTAIN that you can feel a definite pulse of greater than 60 min-1 within 10 seconds:

For all children, compress the lower half of the sternum:

When to call for assistance

It is vital for rescuers to get help as quickly as possible when a child collapses:

An unconscious child whose airway is clear and who is breathing normally should be turned onto his side into the recovery position. There are several recovery positions; each has its advocates. The important principles to be followed are:

The differences between adult and paediatric resuscitation are largely based on differing aetiology, with primary cardiac arrest being more common in adults whereas children usually suffer from secondary cardiac arrest. The onset of puberty, which is the physiological end of childhood, is the most logical landmark for the upper age limit for use of paediatric guidelines. This has the advantage of being simple to determine in contrast to an age limit, as age may be unknown at the start of resuscitation. Clearly, it is inappropriate and unnecessary to establish the onset of puberty formally; if the rescuer believes the victim to be a child then he should use the paediatric guidelines. If a misjudgement is made, and the victim turns out to be a young adult, little harm will accrue as studies of aetiology have shown that the paediatric pattern of arrest continues into early adulthood.

It is necessary to differentiate between infants and older children, as there are some important differences between these two groups.

Since the publication of Guidelines 2010 there have been continuing reports of safe and successful use of AEDs in children less than 8 years demonstrating that AEDs are capable of identifying arrhythmias accurately in children and are extremely unlikely to advise a shock inappropriately. Nevertheless, if there is any possibility that an AED may need to be used in children, the purchaser should check that the performance of the particular model has been tested in paediatric arrhythmias.

Many manufacturers now supply purpose-made paediatric pads or programmes, which typically attenuate the output of the machine to 50–75 J. These devices are recommended for children between 1 and 8 years. If no such system or manually adjustable machine is available, an unmodified adult AED may be used.

Although shockable rhythms are extremely unusual in infants, and the focus of infant resuscitation should be on high quality CPR, there are rare case reports of the successful use of AEDs in this age group. For an infant in a shockable rhythm, the risk:benefit ratio favours the use of an AED (preferably with an attenuator) if a manually adjustable model is not available.

Below, you'll find information on how recognise and provide relief for a child who is choking.

The management of the choking child remains unaltered from 2010 and the sequence of reversing partial or complete obstruction of the airways is the same. Back blows, chest thrusts and abdominal thrusts all increase intra-thoracic pressure and can expel foreign bodies from the airway. In half of the episodes documented with airway obstruction, more than one technique was needed to relieve the obstruction. There are no data to indicate which technique should be used first or in which order they should be applied. If one is unsuccessful, try the others in rotation until the object is cleared.

When a foreign body enters the airway the child reacts immediately by coughing in an attempt to expel it. A spontaneous cough is likely to be more effective and safer than any manoeuvre a rescuer might perform. However, if coughing is absent or ineffective, and the object completely obstructs the airway, the child will become asphyxiated rapidly. Active interventions to relieve choking are therefore required only when coughing becomes ineffective, but they then must be commenced rapidly and confidently.

The majority of choking events in children occur during play or whilst eating, when a carer is usually present. Events are therefore frequently witnessed, and interventions are usually initiated when the child is conscious.

Choking is characterised by the sudden onset of respiratory distress associated with coughing, gagging, or stridor. Similar signs and symptoms may also be associated with other causes of airway obstruction, such as laryngitis or epiglottitis, which require different management. Suspect choking caused by a foreign body if:

Abdominal thrusts for children over 1 year:

If the object is expelled successfully, assess the child’s clinical condition. It is possible that part of the object may remain in the respiratory tract and cause complications. If there is any doubt, seek medical assistance.

9. Accreditation of the 2015 Guidelines

NICE has accredited the process used by Resuscitation Council UK to produce its Guidelines development Process Manual. Accreditation is valid for 5 years from March 2015. More information on accreditation can be viewed at https://www.nice.org.uk/about/what-we-do/accreditation. 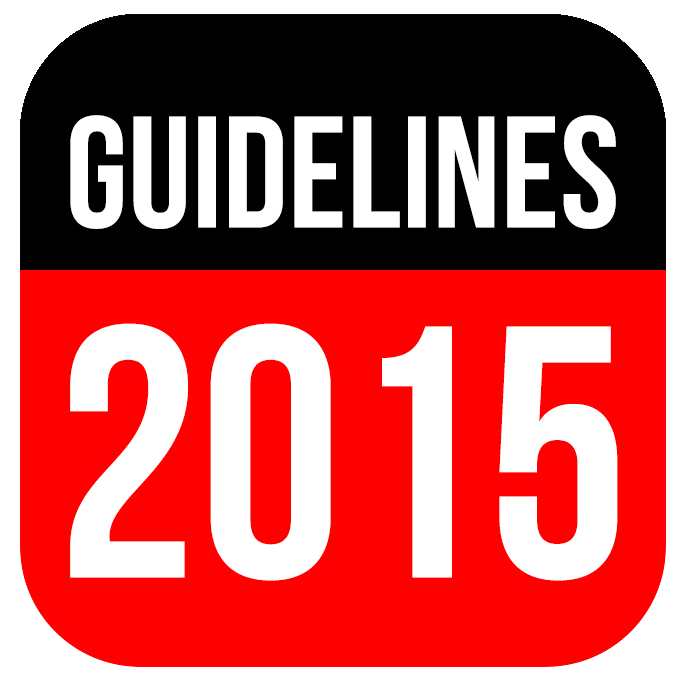